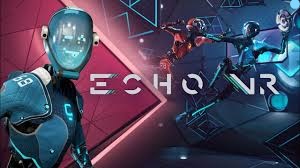 Echo VR is a VR game in which you play disc soccer… in space! As a robot with thruster boosts and other navigational skills, float through the non-air, and score a goal!

You can also fling yourself by grabbing onto walls and other objects. Get into a launch tube, punch people in the head, it’s an all-around great hangout and competitive game. Not too much toxicity, and a great community too. Though… I wouldn’t recommend to younger people, especially those with motion sickness and people simply not able to handle toxicity (it pops up every some match). It’s best played with friends, too, which I don’t have. But the solo experience was really fun! Go check it out!