The FNAF Storyline (in my opinion) FNaF 4 & FNaF (UPDATED) 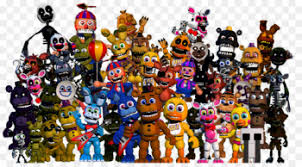 So, I have no idea why I haven’t posted this for a long time. I don’t really like horror games, so I shouldn’t know all this. (This story line series includes every game, except Sister Location and parts of Help Wanted. + Special Delivery) Fredbear’s Family Diner opened in 1972. On one party, one day, a couple years later, (as implied by FNaF 4) there was a kid who constantly has nightmares because of some bullies and his older brother. That kid claims that “These plushies are my only friends in the world.” He constantly, in his dreams, fend off animatronics. On his birthday party, those bullies bring him very, very close for a “kiss” to Fredbear. Fredbear, who was in the middle of singing at the time, happened to close his mouth at that exact same time… and bit off that kid’s frontal lobe. An emergency shutdown was then issued. Fredbear and his friend, Spring Bonnie were thrown away. Among all the chaos, Afton (the owner of Fazbear Enterprises) lured 5 children away… and killed them. 4 of these children’s souls were stuck inside of the new animatronics that were going to be replacing Fredbear and Spring Bonnie soon enough. And the 5th one took on the shape of Golden Freddy, a mix of Freddy and Spring Bonnie. People later reported blood and mucus around the facial areas, and how bad it smelled. ~Trivia!~ ‘There are hand prints on Freddy’s face in FNaF 1, implying that the kid who was shoved into Freddy’s suit tried to resist. (Updated –>) Thing is the books are also canon and we will be covering FNaF 6 right now (about the same era as FNaF 3) as well as a bit of the books. Now to do this, we will have to understand the Good Ending/Lorekeeper Ending. Take a look.

Now… Gabriel is the child within Freddy, Fritz is Foxy, Suzie is Chica, Jeremy is Bonnie, the gravestone hidden under the grass is most likely Cassidy, (Golden Freddy), and the grave under the tree is where we get started with the books, SPOILERS AHEAD, here we go. In ‘The Fourth Closet’, we find out that our main character, Charlie, is actually a robot created by Henry (yellow man, co-owner of fazbear entertainment) to represent his dead daughter’s… OK WAIT, REWIND TIME… d e a d d a u g h t e r ‘ s… Oh. That explains the grave. So, back to our original timeline. After the complaints, the animatronics get thrown into a backroom, withering away. However, they transfer a bit of their souls into the Toy animatronics.

Book Your Event
Call us now
0